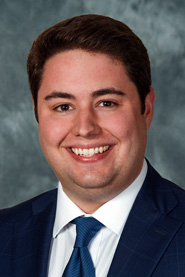 James L. Doyle is an associate attorney for Winderweedle, Haines, Ward & Woodman, practicing in the real estate department.  James concentrates his practice on the representation of individuals, developers, syndicates and lenders in real estate transactions, land use and development, commercial lending, corporate matters and other business transactions.

After Florida State, James earned his Juris Doctor from Stetson University College of Law where he served as a teaching assistant for Legal Research and Writing II and competed as a member of Stetson’s nationally ranked Moot Court team. During law school, James interned with the U.S. District Court for the Middle District of Florida and clerked for a litigation firm.

James Doyle also brings significant government experience to the firm. His internships include the Florida House of Representatives, the Florida Senate, and as a White House Intern for the Office of the Vice President of the United States.

After clerking for Winderweedle, Haines, Ward & Woodman during the summer of 2020 he joined the firm in 2021.